The following is a reprint of the 1897 Post-Dispatch interview with 28-year-old anarchist, Emma Goldman. We trust you’ll be able to discern for yourself what of her words are a bit silly today and which ring true 118 years later. 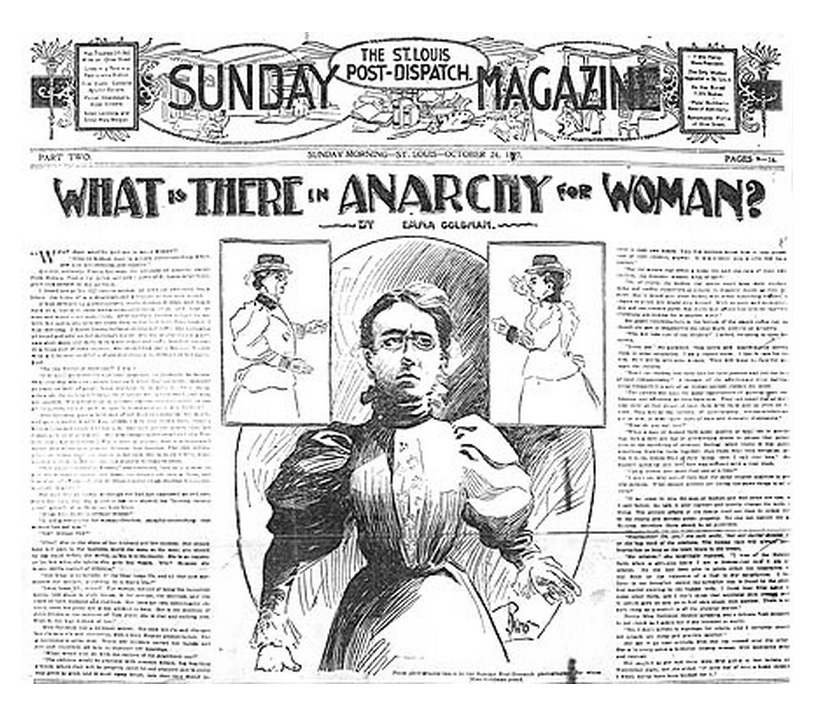 WHAT IS THERE IN ANARCHY FOR WOMAN?

“What does anarchy hold out to me–a woman?”

“More to woman than to anyone else–everything which she has not–freedom and equality.”

Quickly, earnestly Emma Goldman, the priestess of anarchy, exiled from Russia, feared by police, and now a guest of St. Louis Anarchists,[1] gave this answer to my question. I found her at No. 1722 Oregon avenue, an old-style two-story brick house, the home of a sympathizer, [2] not a relative as has been stated.

I was received by a good-natured, portly German woman, and taken back to a typical German dining room–everything clean and neat as soap and water could make them. After carefully dusting a chair for me with her apron, she took my name back to the bold little free-thinker. I was welcome. I found Emma Goldman sipper her coffee and partaking of bread and jelly, as her morning’s repast. She was neatly clad in a percale shirt waist and skirt, with white collar and cuffs, her feet encased in a loose pair of cloth slippers. She doesn’t look like a Russian Nihilist who will be sent to Siberia if she ever crosses the frontier of her native land.

“Do you believe in marriage?” I asked.

“I do not,” answered the fair little Anarchist, as promptly as before. “I believe that when two people love each other that no judge, minister, or court, or body of people, have anything to do with it. They themselves are the ones to determine the relations which they shall hold with one another. When that relation becomes irksome to either party, or one of the parties, then it can be as quietly terminated as it was formed.”

Miss Goldman gave a little nod of her head to emphasize her words, and quite a pretty head it was, crowned with soft brown heair, combed with a bang and brushed to one side. Her eyes are the honest blue, her complexion clear and white. Her nose though rather broad and of a Teutonic type, was well formed. She is short of stature, with a well-rounded figure. Her whole type is more German than Russian. The only serious physical failing that she has is in her eyes. She is so extremely nearsighted that with glasses she can scarcely distinguish print.

“The alliance should be formed,” she continued, “not as it is now, to give the woman a support and home, but because the love is there, and that state of affairs can only be brought about by an internal revolution, in short, Anarchy.”

She said this as calmly as though she had just expressed an ordinary every-day fact, but the glitter in her eyes showed the “internal revolutions” already at work in her busy brain.

“What does Anarchy promise woman?”

It holds everything for woman—freedom, equality–everything that woman has not now.”

“Free! She is the slave of her husband and her children. She should take her part in the business world the same as the man; she should be his equal before the world, as she is in the reality. She is as capable as he, but when she labors she gets less wages. Why? Because she wears skirts instead of trousers.”

“But what is to become of the ideal home life, and all that now surrounds the mother, according to a man’s idea?”

“Ideal home life, indeed! The woman, instead of being the household queen, told about in story books, is the servant, the mistress, and the slave of both husband and children. She loses her own individuality entirely, even her name she is not allowed to keep. She is the mistress of John Brown or the mistress of Tom Jones; she is that and nothing else. That is the way I think of her.”

Miss Goldman has a pleasant accent. She rolls her r’s and changes her r’s into v’s and vice-versa, with a truly Russian pronunciation. She gesticulates a great deal. When she becomes exited her hands and feet and shoulders all help to illustrate her meanings.

“What would you do with the children of the Anarchistic era?”

“The children would be provided with common homes, big boarding schools, where they will be properly cared for and educated and in every way as good, and in most cases, better care than they would receive in their own homes. Very few mothers know how to take proper care of their children, anyway. It is a science only a very few have learned.”

“But the women that desire a home life and the care of their own children, the domestic woman, what of her?”

Oh, of course, the women that desire could keep their children home and confine themselves as strictly as domestic duties as they desired. But it would give those women who desire something broader, a chance to attain any height they desired. With no poor, and no capitalists, and one common purse, this earth will afford the heaven that the Christians are looking for in another world.”

She gazed contemplatively in the bottom of the empty coffee cup, as though she saw in imagination the

“Who will take care of the children?” I asked, breaking in upon her reverie.

“Every one,” she answered, “has tastes and qualifications suiting them to some occupation. I am a trained nurse. I like to care of the sick. So it will be with some women. They will want to care for and teach the children.”

“Won’t the children lose their love for their parents and feel the lack of their companionship?” A thought of the affectionate little darlings being relegated to a sort of orphan asylum crossed my mind.

“The parents will have the same opportunities of gaining their confidences and affections as they have now. They can spend just as much time there as they please of have them with them just as often as desired. They will be the children of love–healthy, strong-minded–and not as now, in most cases, born of hate and domestic dissensions.”

“What do you call love?”

“When a man or a woman finds some quality or qualities in another that they admire and has an overweening desire to please that person, even to the sacrificing of personal feeling; when there is that subtle something drawing them together, that those who love recognize, and feel it in the inmost fiber of their being, then I call that love.” She finished speaking and her face was suffused with a rosy blush.

“Can a person love more than one at a time?”

“I don’t see why not–if they find the same lovable qualities in several persons. What should prevent one loving the same things in all of them?”

“If we cease to love the man or woman and find someone else, as I said before, we talk it over and quietly change the mode of living. The private affairs of the family need not then be talked over in the courts and become public property. No one can control the affections, therefore there should be no jealousies.”

“Heart aches? Oh, yes,” she said, sadly, “but not hatred because he or she has tired of the relations. The human race will always have heartaches as long as the heart beats in the breast.”

“My religion,” she laughingly repeated. “I was of the Hebrew faith when a girl–you know I am a Jewess–but now I am an atheist. No one has been able to prove either the inspiration of the Bible or the existence of a God to my satisfaction. I believe in no hereafter except the hereafter that is found by the physical matter existing in the human body. I think that lives again in some other form, and I don’t think that anything once created over is lost–it goes on and on in first one shape, then another. There is no such thing as a soul–it is all the physical matter.”

Pretty Miss Goldman finished speaking, and a delicate flush mounted to her cheek as I asked her if she intended to marry.

“No; I don’t believe in marriage for others, and I certainly should not preach one thing and practice another.”

She sat in an easy attitude with one leg crossed over the other. She is in every sense a womanly looking woman, with masculine mind and courage.

She laughed as she said there were fifty police at her lecture on Wednesday night, and she added, “If there had been a bomb thrown I surely would have been blamed for it.”

[1] Emma Goldman’s eight days in St. Louis, beginning 16 October 1897, were extensively covered by the local press and drew the keen interest of the authorities. When it was erroneously reported that she planned to speak at an open-air meeting on 19 October in front of the city’s statue of President Ulysses Grant, Mayor Ziegenheim declared such a gathering illegal and ordered police to bar any attempt. Simultaneously, the city’s House of Delegates passed a resolution approving the actions of the mayor and the police department in stifling the “un-American” and “unpatriotic” teachings of a “notorious Anarchist.” Under police surveillance, Emma Goldman spoke the next night at Walhalla Hall to an overflow audience of hundreds. So successful were her meetings in St. Louis that her stay there the following year garnered no coverage at all since, according to Solidarity: “the dailies found out they were helping the Anarchists in their propaganda.” See St. Louis Post-Dispatch, 20 October 1897, EGP, reel 47; and Solidarity, 1 May 1898, p. 4.

[2] Emma Goldman stayed at the home of August Sendlein, an anarchist and cheesemaker.