The following is a Post-Dispatch article from September 30, 1897. The year saw a wave of strikes in the mines of Illinois. This article recounts one of many instances of strikers and their families confronting scabs and police, as well as miners from other towns coming to join the picket line.

This confrontation took place just twenty days after the Lattimer massacre, when 150 Sheriff’s deputies opened fire on a militant group of 300-400 striking miners in Pennsylvania. Nineteen miners were killed, and 17-49 injured—all with bullet holes in the back. The following day, community leaders held a rally calling for calm, to raise money for the dead strikers’ families and to call for the prosecution of Sheriff Martin. On September 12, a group of strikers made their way to home of Gomer Jones, owner of the mine. When Jones could not be found, the strikers burned his home to the ground. On September 20, a march led by women armed with fire pokers and rolling pins briefly shut down the McAdoo coal works. The picket was broken by the arrival of National Guardsmen. Sheriff Martin and 73 deputies were eventually brought to trial, and, of course, acquitted.

In the following article, try not to be confused with the terms ‘miners’ and ‘workers’ being used interchangeable to describe strikers and scabs. 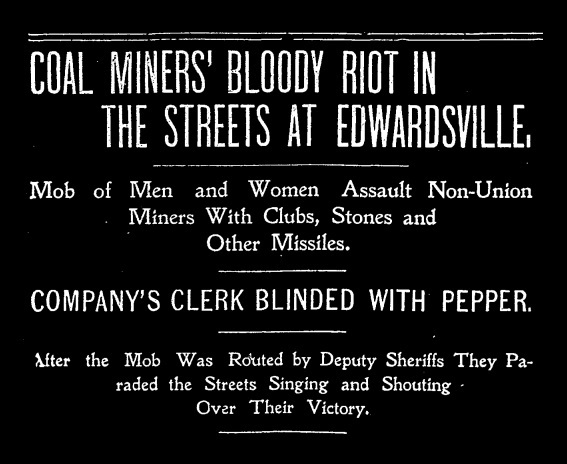 The women took the initiative in the attack, and were assisted vigorously by the striking coal diggers.

The melee started when a striker’s wife stepped into the roadway and threw a handful of red pepper into the eyes of Caleb Bartlett, the Madison Company’s clerk.

In a moment strikers sprang up from all sides and threw themselves upon the non-union workmen and their guards.

There was a general fight, the strikers using their fists and stones and clubs.

The non-union miners fought back with their dinner buckets.

“Scotty” McAllister’s skull was fractured by a blow from a club in the hands of an excited striker. He dropped unconscious to the ground and had to be carried to the rear by his comrades [sic].

“Dutch” Miller was assaulted by a crowd of strikers who lacerated his scalp by pounding him with rocks.

T. W. McCune, a Deputy Sheriff in the escorting posse, was disarmed and dragged to one side where a crowd of irate strikers beat him with their fists and clubs until he was almost unconscious.

Many more of the workers and deputy sheriffs were injured, and several of the strikers, including the women accompanying them, received wounds.

Though heavily armed the sheriff’s officers took their drubbing without making any attempt to use their guns. They were outnumbered ten to one, but they fought with their fists like men. Had a shot been fired, the consequences would have been fearful, as the strikers were frenzied.

The forbearance of Sheriff Burke’s men saved Edwardsville from a reputation of the tragedy of Hazelton.

After the strikers had routed the non-union, workmen and their guardians, they paraded the streets of Edwardsville to celebrate their victory.

With torn coats, disheveled hair and bruised and bleeding faces, they marched proudly under the stars and stripes. The women were in the lead. All were shouting hoarsely, waving hats, shawls, flags and bonnets, and heaping maledictions on the “scabs” and deputy sheriffs.

After the street parade they dispersed and kept away from their usual haunts.

The riot resulted from a partially successful efforts to work the Madison mines. Last Friday Superintendent W. H. Glass promised protection to those who would go back to work. Every morning for nearly a week the miners have met in a certain place and marched to the mines under the guard of Deputy Sheriff John Dillon and a posse of ten men.

Wednesday night in Edwardsville strikers were reinforced by men from Troy, Collinsville, Mt. Olive and Staunton.

The delegation from Glen Carbon brought thirty women with them and these were the leaders in the subsequent riot.

Three hundred men blocked the roadway when Supt. Glass and his men marched out of town Thursday morning.

The workers were called on to join the strikers; they refused, and in a moment the women had reached Bartlett and filled his eye with pepper. Then the fight began. The workers defended themselves as best they could with their dinner pails and sticks, but were quickly routed.

Superintendent Glass and eight men fought their way through the attacking forces and made their way to the mine. They are at work now and unmolested.

Deputy Sheriff Dillon threatened to shoot if the attacking force did not desist, but his warnings were unheeded.

When he saw that threats were of no avail he formed his posse in line and ordered an attack, but cautioned no one to shoot.

The strikers replied by swooping down on his little force and putting them to fight.

The miners retreated in all directions and the posse was hopelessly scattered.

Then started to the triumphant march through the streets of the little town.

This celebration continued until the participants became exhausted.

Many of the more conservative citizens of Edwardsville feared that the frenzy of the strikers might lead to scenes of disorder in the town and called on the Sheriff to increase his force.

It is rumored that more strikers will reach here during the night to help intimidate the non-union men.

Supt. Glass of the mines said Thursday that the force of deputies would be increased Friday to a number sufficient to protect the miners and that the workers would be escorted to the mines safely.

There is a feeling of uneasiness among the non-union miners and doubts are entertained as to whether any will subject themselves to the possibility of another attack.