The following article is from the Columbia Daily Tribune, August 4, 2003. Though the world saw some of its largest protests ever leading up to the U. S. invasion of Iraq, the anti-war movement largely fell-apart shortly after the March 2003 start of the war.

Members of this mob likely had many reasons for burning an american flag, but the war in Iraq was likely front and center. In addition to the flag-burning and graffiti, other forms of petty vandalism—like dragging newspaper boxes into the street—were also committed. And, of course, the local anti-war organizer gave the damning quote the paper was wanting. 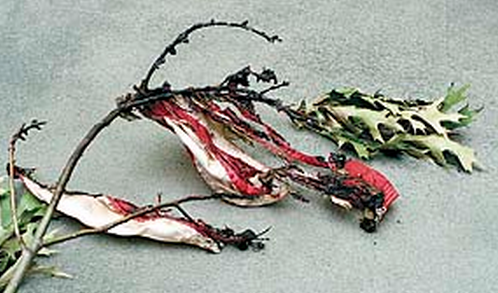 A mob of about 100 people, including at least one grammatically challenged vandal, swarmed Boone County Courthouse Square early yesterday morning, pulled a U.S. flag from a pole and burned it.

Police arrested seven people in the 12:24 a.m. incident, which also included the spray-painting of a fountain near the courthouse, the pavement a few feet away and a pedestrian walk next to Otto’s Corner Bar & Grill.

That’s where Columbia resident Joe Moore and some friends were when they saw a group of people walking west on Walnut Street.

“We thought at first it was some sort of parade,” said Moore, who saw the group, followed by a couple of cars, turn toward the fountain between the courthouse and the county government building.

“It become obvious, once the cars went into the square, that there was a problem,” he said. “It looked to me like they pulled the flag down and started it on fire.”

Moore said he called police on his cell phone and saw the crowd disburse when city officers arrived about a minute later, followed by county deputies.

“Seven were arrested because seven were caught,” Reddin said. “There were a lot more people at the gathering than there were law enforcement officers.”

Reddin said if more people can be identified, the sheriff’s department would look to make additional arrests. Investigators have not yet determined the cost of damages to county property.

A meeting is considered “unlawful assembly” when state or federal laws are violated, Reddin said. “They did that with the property damage and driving cars up by the fountain.”

What remained at 8:45 a.m. today were a flagpole displaying only a Missouri state flag and four areas of graffiti. On the limestone rock around the fountain was the message, “FREEDOM NOW!” Nearby, someone spray-painted “IMPEACH BU$H!” and an encircled “A,” a symbol that means “anarchy.”

On the Walnut Street pedestrian walk that runs between the square and Otto’s Corner Bar & Grill was painted, “WHO’S STREETS? OUR STREETS!”

“Something like this, especially of a political orientation, we just have not had before, that I’m aware of,” said Sgt. Tom Reddin of the Boone County Sheriff’s Department.

He said a few of the seven who were arrested mentioned that some members of the group had been at a nightclub earlier.

“It sounds like it was a spur-of-the-moment thing,” Reddin said.

He wasn’t sure if it was an example of a “flash mob,” a recent phenomenon in which a large group of people prompted by e-mails, cell-phone calls and other digital means of communication gather suddenly. Participants tend to perform innocent albeit strange acts that sometimes turn criminal.

“There’s no information about e-mails and pagers” being used to call together members of yesterday’s mob, Reddin said. “That’s possible, but we just don’t know.”

Mark Haim, director of Mid-Missouri Peaceworks and a frequent critic of President George W. Bush and his policies, said he’s not aware of any members of his group being involved.

“It sounds like it was a really juvenile kind of thing, with property destruction,” Haim said. It’s “certainly not a way to win support for causes.”

Boone County workers this morning used a boom truck to fix the flagpole rope that had been cut and to replace the burned U.S. flag.