In 2007, the National Socialist Movement announced it would be marching in Columbia, Missouri. The city government, clergy, community leaders, media and NGOs began a campaign of encouraging the town to just ignore them. While many who showed up the NSM march did so for the spectacle of it, other showed up to physically stop the march

The following is a report back from the War On Misery #3:

AND THEY USE TO JOKE OF MISSOURI

AS A SAFE HAVEN FOR THE KLAN

The National Socialist Movement’s five-hour parade is completely stopped within the first thirty minutes. Despite the presence of local, county, state, and SWAT police, the crowd surged forward at the first glimpse of the fascists, passing mounted police and running up against the two dozen police guarding the fifteen Nazis. Punches and kicks met the fascists, as well as “Fuck You’s”, beer cans, their own signs, and an egg. Police, clearly panicked,* proceeded to zig and zag the Nazis back and forth across the street, by quick-moving, confrontational groups of three to five who brought along all new abuse and insults, and who were able to hold ground long enough for other protesters to swarm. Multiple times the police escort was brought to a complete standstill, allowing for beautiful moments of protesters stripping the Nazis of their hats, armbands, signs and flags. These brief periods of bedlam also allowed for spectators to turn participants: realizing the police lack of control, the lack of legal account ability, and how much fun those in direct contact with the Nazis and police were having spectators who had been seen earlier snapping pictures and joking with friends found themselves in the thick of it, shouting and punching, including a frat boy who stepped forward and leveled one. Even with an episode of macing and another of arrests (also involving mace), protesters kept the pressure on, forcing the police and Nazis to eventually retreat back into a parking garage–the march’s place of origin and the police’s base of operation. Still, individuals pursued the Nazis up into the garage hurling insults, making the police escort the fascists in cars out the other side, to a Lowes’ parking lot and then down to Jefferson City, where police and Nazis said their emotional good-byes.

Ignoring fascists is one of the worst ideas, and yet politicians, religious leaders, police, local media and liberals alike all tote this as the best course of action. Frequently, in America when fascists congregate, in contrast to many’s first response of “Fuck no! Not in my town,” the aforementioned groups begin setting up Acceptance Days, Unity Days, Tolerance Days and interfaith prayer groups which have all proven to be little more than adult-day care with such selling points as free hot dogs, music, and games provided by nervous officials hoping not to have their towns trashed.

First Ward Councilwoman Almeta Crayton said the most important thing was for adults to make sure teenagers and young adults did not attend the march and try to take matters into their own hands. “Come Saturday, I want you in between a kid and downtown,” Crayton said at a meeting of city leaders. “I’m dealing with 15, 16, 17 year-old men who are angry.” The city even went so far as momentarily renaming 9th St., “Freedom Way,” to try and show opposition to the march they sanctioned. Anyone near 9th St. on March 10, could see firsthand the sorts of things the city has in mind in regards to freedom.

Columbia’s Diversity Day was praised as a safe haven for those who were “more at risk of arrest:” namely working class, black youth. They, like the rest of the rabble, deserve to get their kicks in too, and to assume they know nothing of police evasion is not only insulting, but idiotic. And while Columbia’s Diversity Day at no point addressed the fascist elephant in the room or celebrated those present’s cultural differences, it did manage to keep the bulk of Columbia’s non-student population at bay and thwart any real form of togetherness that a town-wide riot (like the one sparked previously by an NSM march in Toledo ) might have facilitated… also with free food and music to boot! 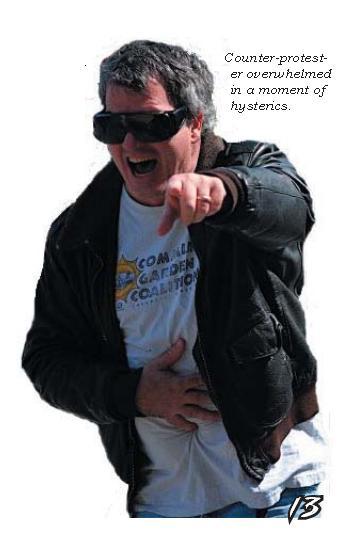 * Throughout the march those with access to police scanners and walkie-talkies were treated to cries for back-up and frenzied commands.