From a forthcoming history of Missouri slavery and resistance:

John had lived his whole life in Missouri, having been born into slavery in Fayette. He never knew his father who had escaped to South America when he was a baby. When John was seven, his mother was sold south after insulting their master, Moses Burton. Before adulthood, John was sold a number of times.

On Christmas day 1850, John married a slave named Maria who lived at a nearby plantation. John and Maria had a child in addition to John adopting Maria’s two children. But after being sold 30 miles away, John was forbidden to visit his family. McDonald (John’s new owner) told John to forget his old family and marry one of his slaves—the implication being John would give McDonald more slaves.

Fed up after six weeks, John decided to run away to Canada. Just before day break, John stole one of McDonald’s mules and left to visit his family one last time. After spending the night hiding in the woods, John stole a boat and crossed the Missouri River. In Fayette, John visited his father-in-law, Lewis Tomlin. A free barber by trade, Tomlin had bought his wife and his freedom. John told Lewis his plan, swearing he would lose his life before his freedom. Lewis responded by offering John his pistol. John declined saying he felt fine with his corn knife. John then went to see Maria and their children.

After saying goodbye, John headed north into an unknown area. At this point John had been away from McDonald’s for three days. Around noon, John was stopped by Seneca Diggs. Diggs was a slave-owner in the fields overseeing the drying of tobacco. Diggs demanded to see John’s pass. John tried smooth-talking Diggs for a bit, but Diggs decided John was a runaway and ordered his slaves to catch him. After running for an hour, six slaves and Diggs cornered John who had been brandishing his knife. Not wanting to make the first move the six slaves waited for Diggs to attack. When Diggs did John stabbed him and then kept running. John soon heard Diggs ordering the slaves to pursue him, so John returned and stabbed Diggs till he died. At this point John was able to convince the remaining six to stop chasing him. 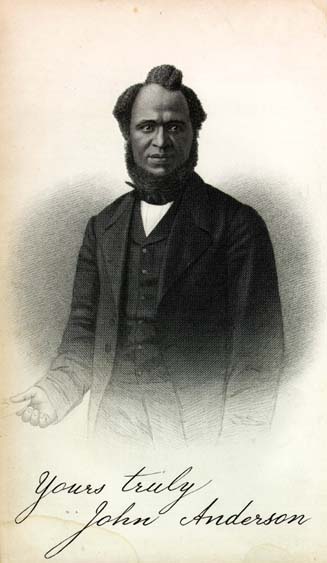 Having killed Diggs, John returned to Maria for consolation. After a brief visit, John continued north, travelling mostly by night and starving except for food he foraged from the woods and stole from plantations. Before stealing another boat and crossing the Mississippi River two weeks into his cavale, John was confronted and almost captured two more times.

John then made his way through Illinois over the next week, successfully gambling on which houses to ask for food and rest from. At one point John found a rail road cart and used it to get most of the remaining way to Chicago, where he met abolitionists. They housed him for three weeks and paid his way to Windsor, Canada.

A biography of John’s was published by abolitionists.