Kevin Johnson killed Sgt. William McEntee in the summer of 2005. McEntee had been involved in the death of Kevin’s 12-year-old brother earlier in the day. The following is taken from a pamphlet written in Kevin’s defense put out between his first and second trials. Though hindsight would prove some of the essay’s assertion quite wrong, it gives a good overview of the people involved in his trial, and anti-police vandalism and sentiment around town at the time. The excerpt deals with the latter.

Kevin is currently on death row.

NO TEARS FOR McENTEE

Those were the words scrawled across a brick wall in south city mid-trial. The media went nuts. “How terrible and disturbing,” they said. And then found three people on the street to say the same thing. “It shocks me, because the police are here to protect us,” they even got one to say. Of course, that particular person was referring to the giant “ALL COPS ARE BASTARDS (ACAB)” written across the reservoir by Grand and I-44. All the reporting was hilarious: it was as though every person they got to feign (or maybe even actually relate heart-felt) disgust just became another face they paraded in front of the camera (and we’re sorry, but in light of certain evidence we can’t help ourselves) to say, “2+2=5.” 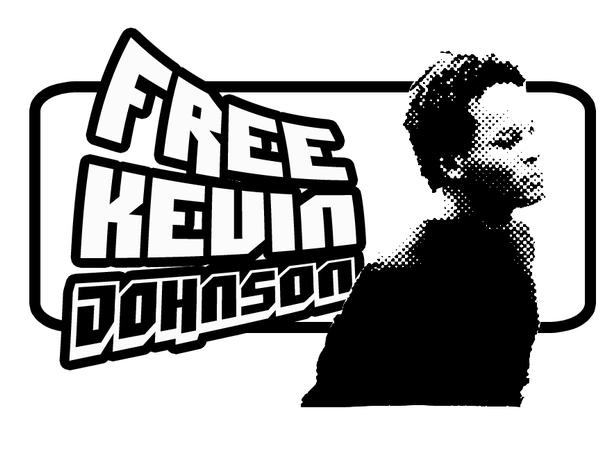 And we don’t feel it a stretch to say people are okay with what Kevin allegedly did. From time to time we encounter “Free Kevin Johnson” or “Monster in the Media, Hero on the Streets” t-shirts and stickers in places we weren’t expecting them. We’ll see “R.I.P. Bam Bam ” shirts, too. There’s the ubiquitous anti-cop and anti-snitching graffiti around town. And then during the trial commuters passing through Webster Groves, I-70 just north of downtown, I-55 just south of the arch and again just before the county line were treated to pro-Kevin banners hanging from overpasses. Most read, “FIRE TO THE PRISONS. FREE ROCKHEAD.” One was even accompanied by a flaming molotov cocktail with a circle A across the bottle’s label.

At jury selection when McCulloch asked a middle-class looking white man of about sixty, “Is the fact that it was a police officer who was heinously killed going to effect your decision making abilities,” he replied, “Oh, no. Not at all.” Two local DJ’s were even fired over a conversation that occurred days after the shooting, in which they encouraged callers to debate what they would do if a cop uncuffed them and challenged them to a fight – would they go for the cop’s gun or radio first?

Most sensational of all, however, is the desecration of McEntee’s memorial mere hours after its dedication. Even with a $1,000 reward, the media for months could only refer to the vandalism as an appalling crime, quoting Kirkwood Police Chief Jack Plummer as saying the “cowardly punk” responsible for the obscene act of pouring paint on the granite marker reflected the “portion of every society that is not happy unless they can pull everything down in the gutter in which they reside.” Whoa. Police seethed with anger as they used toothbrushes to try and restore the marker. Then a few months later police arrested a young man, 24 year-old Jeremy Proctor, after he allegedly bragged to friends (who then decided to go to the police ) at a party that he had vandalized the memorial. It’s unclear how much of the story is true, but what is certain is that for a few weeks following his arrest Jeremy was the target of continual police harassment. In addition to the marker, there’s been a memorial bike ride for McEntee as well as a stretch of Highway 21 re-named in his memory.