In 1962 after a police officer shot Donnel Dortch, a black teenager, Kinloch erupted into at least four days of protests, riots and arsons. The response of the police, city officials, the governor and media are quite similar to their Ferguson descendants 50 years later.

Kinloch, Berkley and Ferguson (three touching municipalities in north St. Louis County) share an interwoven racial history. Kinloch and Berkley used to be one municipality (Kinloch), which was unofficially divided into a white, northern part and a southern, black part. When school integration began in the early 1900s, white parents in Kinloch boycotted and picketed the schools. It was decided that a vote would determine whether or not to continue school integration. To the shock (and horror) of the white residents, the black residents out-voted them. Northern Kinloch pulled away and formed Berkley.

All this time Ferguson had functioned as an all-white, sundown town for the black residents of Kinloch. They were allowed to ride the street car to work in downtown, but they could get off, shop and (definitely not) live there. It wasn’t until around the time of Dortch’s death, that the first black family was able to move to Ferguson (and at great stress). Up until 1968, many of the roads leading between Kinloch and Ferguson were still barricaded.

The following are two news articles from the time of Dortch’s killing and the subsequent protests.

A shotgun blast today wounded three policemen and a bystander during a tumultuous demonstration by hundreds of Negroes protesting the fatal shooting of a 19-year-old by an elderly policeman in suburban Kinloch.

A force of nearly 100 county and suburban police dispersed the shouting, shoving crowd and stood by today to enforce a 10 p.m. curfew declared by Mayor Clarence Lee.

Gov. John Dalton alerted the Missouri highway patrol and asked aides to check whether the situation “warranted action by the national guard.”

“We will do whatever is necessary to preserve peace,” Dalton said in Kansas City.

The crowd estimated at more than 300 negroes massed in front of Kinloch City hall early today and chanted “We want Mason….We want Mason.” They demanded Israel Mason, 74-year-old Negro policeman, who was suspended pending a hearing into the fatal shooting Sunday night of Donnel Dortch when the youth resisted arrest on charges resulting from a drag race.

Lee announced today that Mason had submitted his resignation and it had been accepted. He announced that police and county officials were investigating Dortch’s death and planned to present information to the St. Louis county grand jury.

Police said the three policemen, all white, and a Negro bystander were injured by a shotgun blast fired from the window of a slum clearance project.

County Policeman Kenneth Armstead, 29, and Hugh Hodges, 26, were reported in serious condition at a hospital. Policeman William Rushing, 33, was in satisfactory condition. The bystander, Anthony Williams, 32, was treated and released.

Police said up to 10 fires broke out, most of them apparently set by arsonists. One destroyed the Dunbar Elementary school. Another damaged the newly completed home of Police Chief Roosevelt Hoskins. The Chief, acting on a hunch, drove home, discovered the blaze and extinguished it himself.

About 85 county and suburban police poured into the town. With riot guns, machine guns, and police dogs, they cleared the streets. Fire alarms continued past dawn.

Students poured out of the high school when a board of education secretary received a call warning of a bomb. Students returned to classes after police and firemen searched the school and found no explosives.

Police rounded up and questioned “more than 50 persons” in the shooting and burnings. They charged Henry Bradford, 24, and Charles Williams, 19, with felonious assault in the shooting.

Kinloch has a population of 6.500. It is one of several predominately Negro suburbs in the St. Louis area which date back to Civil war days. 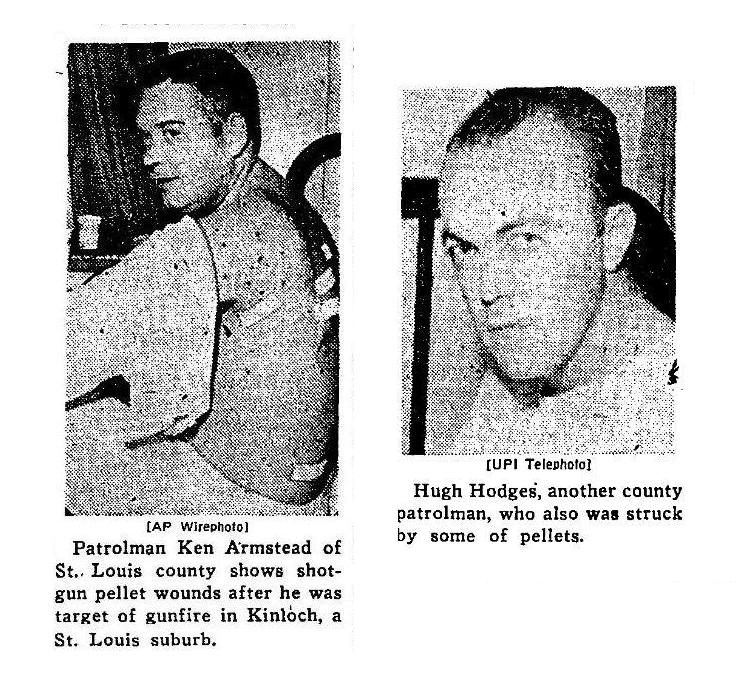 Arsonists set eight fires, five in unoccupied houses, last night and early today in suburban Kinloch. The Negro community has been the scene of violence since an elderly policeman killed a young man Sunday.

The police kept down further violence by enforcing a curfew and preventing crowds from gathering. Six persons were arrested for having violated curfew.

A man and a youth were seized by county policemen, who said the pair had admitted setting four fires. The number of fires set since Sunday has reached 21.

Mayor Clarence Lee of Kinloch said all the fires had been the work of arsonists.