In the early fall of 2006, the location of the Council of Conservative Citizens’ annual secret picnic was leaked. Local antifa had been trying to disband the CofCC for the past few years: harassing them at their own demonstrations and publishing counter-information about them. As far anyone can tell, after this brawl the CofCC never met publically again in St. Louis. 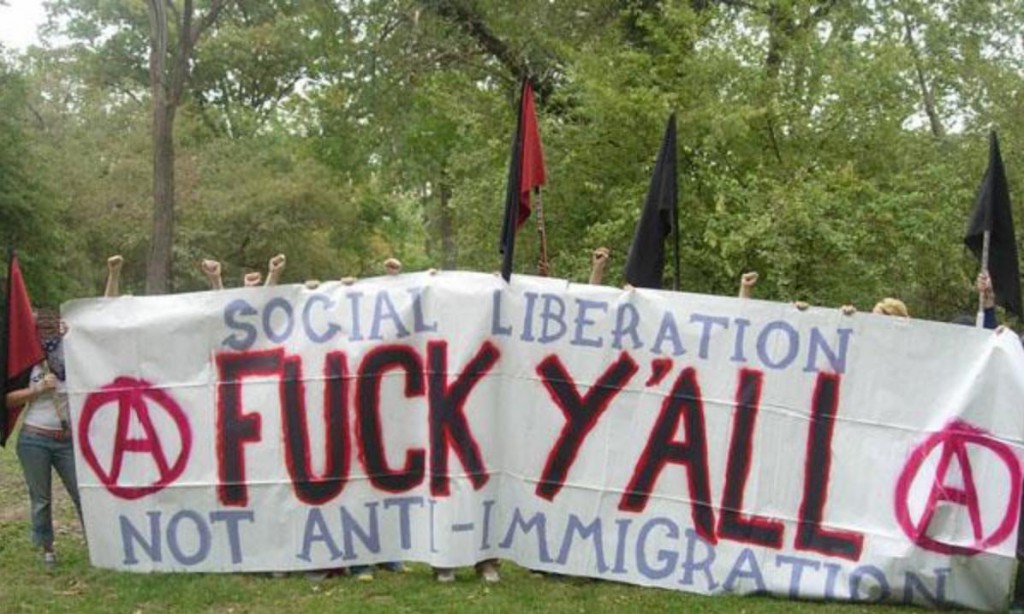 The following is a communique originally published on the St. Louis Independent Media Center‘s website:

On Saturday 9/30 an annual afternoon picnic for St. Louis-based national white supremacist group, Council of Conservative Citizens (CCC), turned sour shortly after one o’clock in Affton’s Mathilda Park. “We will rise again!” filtered through their PA just before dozens of anarchists suddenly emerged behind a large “FUCK Y’ALL! Social Liberation, Not Anti-Immigration” banner.

They surged into the parking lot and up to the pavilion hurling insults of “Fuck you!” “Nazis!” “Class traitors!” and “Delete yourself!” The sounds of Sepultura and a chorus of airhorns, whistles, and bullhorns filled the air and the mob plowed over one of their picnic table’s and uprooted an American flag. Several CCC men, including president Gordon Lee Baum, attorney-at-law, moved into the mob and started a brawl that the anarchists soon finished. In the end, at least two Nazis were severely beaten and bloodied, another given a killer tittie-twister (purple-nurple), and one stripped of his cane he was wielding as a weapon. 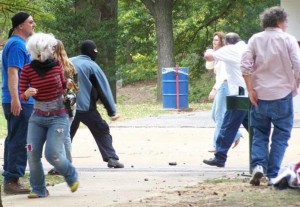 When police finally showed up, the mob had disappeared and the Nazi picnickers were left to moan to the police about the ambush. Police arrested a bystander (accusing him of supporting the anarchists) and a Nazi picnicker.

Neighbors were generally horrified the CCC had chosen their neighborhood to organize and preach their hate. Neighbors also openly supported the anarchists for defending themselves after the CCC attacked their banner and the people behind it.

A couple of the picnickers even disavowed their association with the CCC. One who had been invited by a co-worker and had brought her children, vowed never to come back. Another claimed she had married into the organization not knowing the extent of what they stood for. Others openly admitted they were running out of places to meet, having already been harassed in North County and now this episode in South County. To top it off, the following day, the CCC’s St. Louis website crashed and was offline for 24 hours.

The anarchists have sent a clear message to the CCC: “St. Louis is not a hospitable place for you to meet. Delete your headquarters. Delete yourselves. We have a class war to fight.”