You are here: Home > Anarchism > University City, October 2008: Blood on the Tracks Poster

This poster was made in response to the sensational and racist news coverage of an influx of black youth hanging out in the Loop in the Summer / Fall of 2008. The title specifically references an RFT article about it.

Dozens of the 15” x 20” posters were wheatpasted along the Loop, including one in the lobby of the RFT building and another on a mail box. * 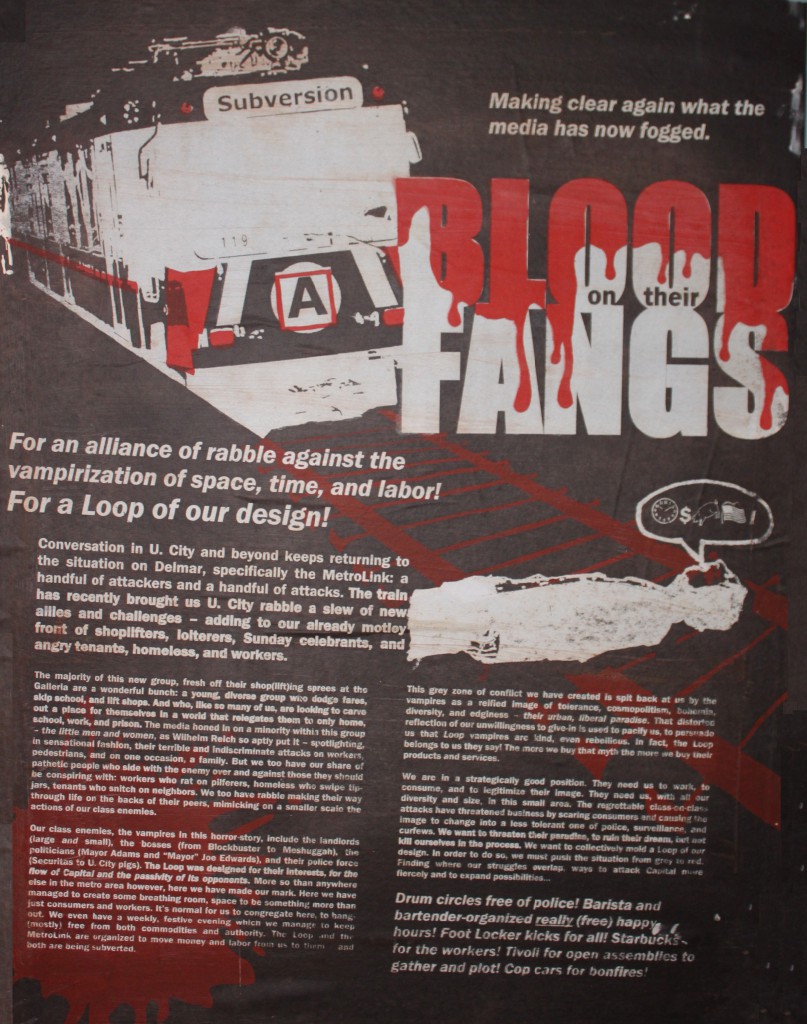 Making clear again what the media has now fogged.

BLOOD ON THEIR FANGS

For an alliance of rabble against the vampirization of space, time, and labor!

For a Loop of our own design!

Conversation in U. City and beyond keeps returning to the situation on Delmar, specifically the Metrolink: a handful of attackers and a handful of attacks. The train has recently brought us U. City rabble a slew of new allies and challenges—adding to the our already motley front of shoplifters, loiterers, Sunday celebrants, and angry tenants, homeless, and workers.

The majority of this new group, fresh off their shop(lift)ing sprees at the Galleria, are a wonderful bunch: a young, diverse group who dodge fares, skip school, and lift shops. And who, like many of us, are looking to carve out a place for themselves in a world that relegates them to only home, school, work, and prison. The media honed in a on a minority within this group—the little men and women, as Wilhelm Reich so aptly put it—spotlighting, in sensational fashion, their terrible and indiscriminate attacks on workers, pedestrians, and on one occasion, a family. But we too have our share of pathetic people who side with the enemy over and against those they should be conspiring with: workers who rat on pilferers, homeless who swipe tipjars, tenants who snitch on neighbors. We too have rabble making their way through life on the backs of their peers, mimicking on a smaller scale the actions of our class enemies.

Our class enemies, the vampires in this horror story, include landlords (large and small), the bosses (from Blockbusters to Meshuggah), the politicians (Mayor Adams and “Mayor” Joe Edwards), and their police force (Securitas to U. City pigs). The Loop was designed for their interests, for the flow of Capital and the passivity of its opponents. More so than anywhere else in the metro area however, here we have made our mark. Here we have managed to create some breathing room, space to be something more than just consumers and workers. It’s normal for us to congregate here, to hang-out. We even have a weekly, festive evening which we manage to keep (mostly) free from both commodities and authority. The Loop and the Metrolink are organized to move money and labor from us to them—and both are being subverted.

This grey zone of conflict we have created is spit back at us by the vampires as a reified image of tolerance, cosmopolitism, bohemia, diversity, and edginess—their urban, liberal paradise. That distorted reflection of our unwillingness to give-in is used to pacify us, to persuade us that Loop vampires are kind, even rebellious. In fact, the Loop belongs to us they say! The more we buy that myth the more we buy their products and services.

We are in a strategically good position. They need us to work, to consume, and to legitimize their image. They need us, with all our diversity and size, in this small area. The regrettable class-on-class attacks have threatened businesses by scaring consumers and causing the image to change into a less tolerant one of police, surveillance, and curfews. We want to threaten their paradise, to ruin their dream., but not kill ourselves in the process. We want to collectively mold a Loop of our design. In order to do so, we must push the situation from grey to red. Finding where our struggles overlap, ways to attack Capital more fiercely and to expand possibilities. . .

Drum circles free from police! Barista and bartender-organized really (free) happy hours! Foot Locker kicks for all! Starbucks for the workers! Tivoli for open assemblies to gather and plot! Cop cars for bonfires!

*Incidentally, days after the poster was placed there, Todd Shepard gunned down Sgt. Michael King while he was parked next to the mailbox. Being the closest standing object to the killing, King’s memorial of teddy bears and balloons was built around the poster. After a few days, someone bothered to read it and after failing to scrap it off, painted over it.

Shepard killed King in response to police killing his lover in a raid years earlier. King was not involved in the raid and Shepherd choose him more or less at random. He hoped the attentat would help end “the unfair treatment of blacks and lower-class people by the government,” and spark a revolution. While being prosecuted by Robert McCulloch, Shepard heckled McCulloch and at one point stood up and told the prosecutor to shut the fuck up. Shepard is currently serving a life sentence for the killing.